This past February 18th I joined up with the Utah Xterra Owners Club for their annual Pony Express run. Since moving to Utah this past summer and acquiring a 2006 Nissan Xterra I have been keen to get out and explore many of the canyons around Cache Valley. This past summer and fall the Utah Road and Recreation Atlas (Benchmark Maps) has been top on my reading list for finding new places to explore. One place I have been really interested in is the west desert area of Tooele, Juab and Millard counties. The area is also called the Great Salt Lake Desert and includes the Dugway Proving Grounds (no public access), The Pony Express Trail and a portion of the Historic Lincoln Highway. Plus it’s a really big wide open place with small mountains that look like islands and has tons of potential for photography. If that wasn’t enough my long standing project about looking at the west has up to this point primarily consisted of images showing how we experience the west through visiting National Parks. Joining up with an automobile club would be both fun and new way to think about how we experience the western landscape and meet some fellow Xterra owners.

We planned to meet at 9 AM in at a gas station in Lehi. This was my first time here and I have to say I was impressed with the town’s old commercial district and the grain silo. It was a perfect sunny morning with lots of activity going on. When the group of Xterra’s I was in pulled up to the gas station there were about 20 Land Rovers leaving on some adventure. Then I saw a group of road cyclists (about 30 strong) heading up the road. This must be a popular place. After everyone in our group of 11 vehicles had fueled up and did whatever we needed to do at the gas station we headed out taking 73 west toward Cedar Fort for about 30 miles then hit gravel road at Five Mile Pass and kept going west. After a short distance we stopped as a group to take the opportunity to air down our tires. This was something I was initially wary of doing since I did not have a way to air them back up. Talking to a few drivers I learned that by deflating the tires it would provide better grip and also absorb some of the road vibrations. With over 100 miles to go I decided to air down slightly and see if I noticed any difference. It was hard to tell how much difference it was making for my ride as I only aired down about 7 pounds. I’ll have to experiment with this more on future runs. 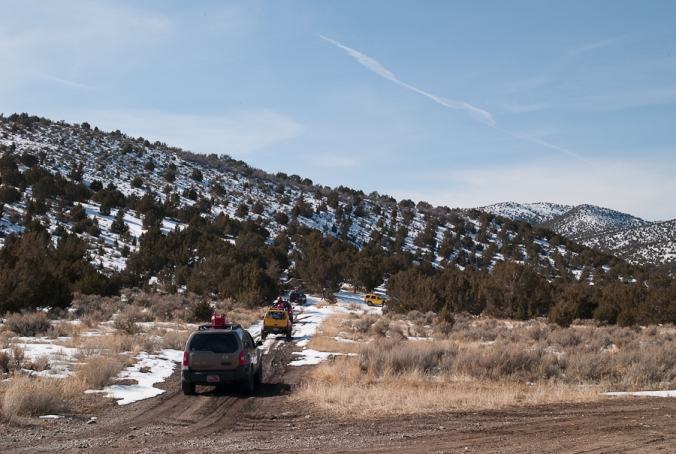 Our next stop was Lookout Pass Station. We climbed a small hill had a look around, snapped some pictures of our vehicles with their first mud of the day then headed down to the walled off pet cemetery at the base of the hill. We attempted to drive up Little Valley Rd. on our way to Simpson Springs but due to bad road conditions we decided to head back to the main Pony Express Road. Being new to 4-wheeling it was one of the muddiest sections of road I have been on. I think it was a good decision to turn back and try it again when it has dried out. 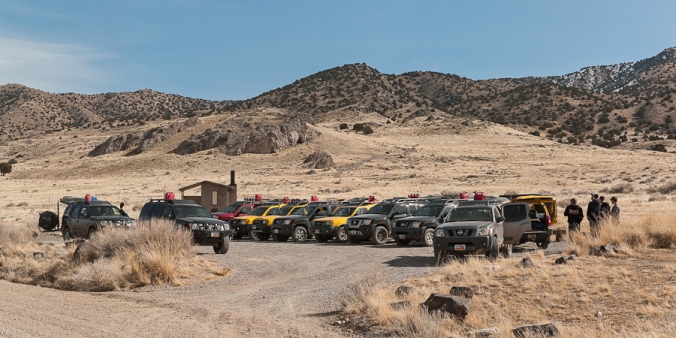 Soon after we arrived at Simpson Springs Pony Express Station and stopped for lunch, conversation and picture taking. The highlight of the stop was watching a helicopter rounding up what I assumed to be wild horses. After some time the horses actually ran pretty close to where we were parked and everyone tried their hand at photographing the action. I got a couple of shots off before my camera battery mysteriously died. After some time we geared up and headed west toward Dugway Pass. Between Simpson Springs and Dugway Pass it’s about 20 miles of straight and flat road. Leave plenty of distance between vehicles (dust and visibility) and watch your speed. It’s easy to start going fast and you have to remind yourself that gravel roads handle very differently from highways. A hole in the road or dip could put you in a bad situation a long way from help. 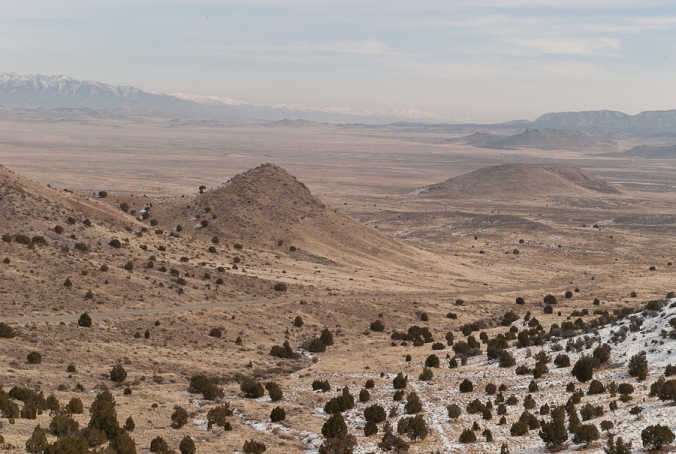 After a restroom break at Fish Springs National Wildlife Refuge we stopped at Wilson Hot Spring. This was where my Xterra got muddy. The drive out to the spring was a sticky mix of mud, sand and salt. At one point I was sliding toward a very wet patch that had boards across it; some kind of sign not to go that way. Luckily I stopped before sliding into it and was able to back out and take the little bypass. The sticky mud reminded me of a passage in Earl Swift’s book The Big Roads,  “a truck convoy finding the Siberling Cutoff impassable, set off across the salt. This would have been a risky move in a light runabout. In a giant cargo hauler the results were inevitable. every truck that ventured onto the flats broke through and became hopelessly mired; even a Caterpillar tractor failed to achieve any traction in the stinking goop that lurked beneath the surface.” (page 68). The story ends with the trucks being carried out by hand. I’m glad to be living in a time of better roads and capable vehicles. The story is a good reminder of the dangers of traveling in the west desert of Utah. 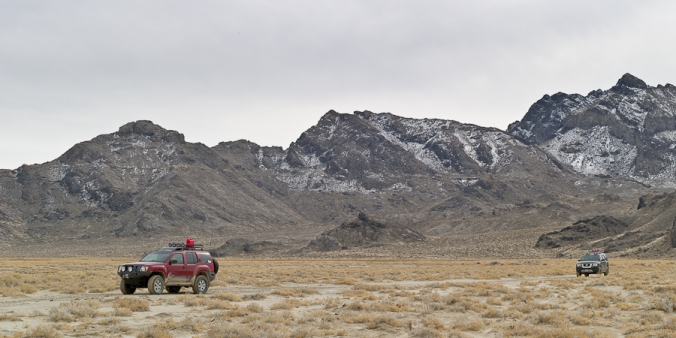 A little farther down the road on the other side of the Fish Springs Range we took a side road at the Utah and Emma Mines. It was a nice climb up to the top. I waited on the main road until the end of our convoy as I wanted to get a shot of all the Xterras going up the road before I joined the party. The drive up the old mining road ended with everyone parking in a row with a spectacular view of the Deep Creek Range and Snake Valley. In low range and third gear I only had to tap the brakes on a few sharp bends in the road on our way back down. At this point we would be heading in generally North West and would go through the very small town of Callao. 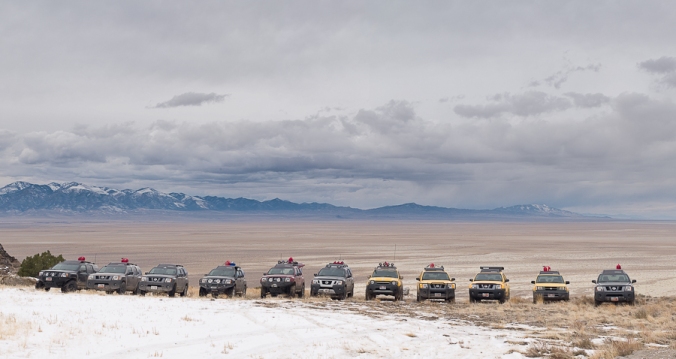 About 5 miles out of Callao we turned onto a section of road that is marked both as the Pony Express Rd. and the Old Lincoln Highway. Except for one spot the road was dry but it was slow going as the road wound through many washes and small hills. This was the only part of the trip where we had traffic coming from the other direction. I can only imagine what it must have been like traveling in this area with a 1930’s or 40’s era vehicle (loose steering, breaks that lock up, no seat belts) and then coming around a curve to find another car headed your way. After 25 miles we were back on asphalt. Realizing we had missed the turnoff to take us to Gold Hill; members of our group talked via radio to see who wanted to go to Gold Hill and who wanted to just head to Wendover. Most of us decided to go to Gold Hill and arrived around 5 PM the place was literally a ghost town. I now understood why there were so many photos on the web of this old store front. It’s about the only thing there. I joined in and shot about 30 frames of the building from a few angles so I could stitch together a panoramic image of the place. 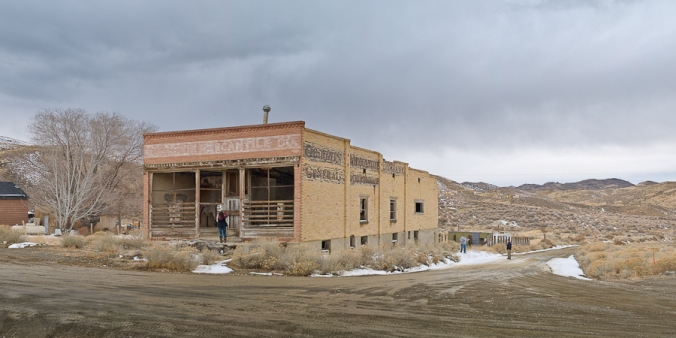 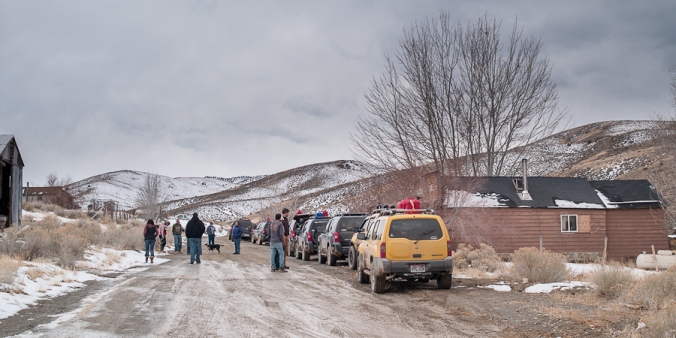 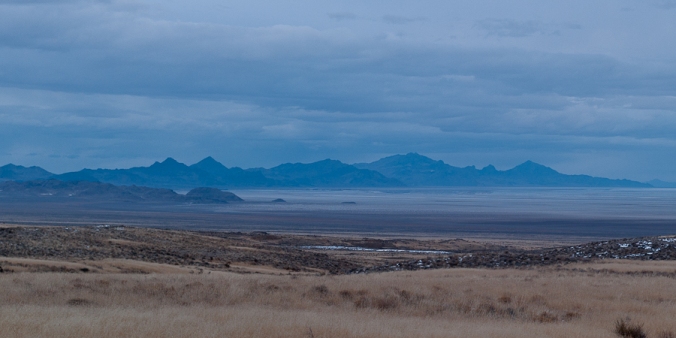 Next stop Wendover. A quick dinner and then the trek back to Logan. Since a winter storm was hitting the Wasatch Front I opted to take a northern route back to Cache Valley via the Old Midland Trail (Utah 30) and hopefully avoid traffic and snow. As it turns out it was the best option. In two and a half hours I made it to Tremonton and entered Cache Valley via Riverside. At Beaver Dam the snow had started and the road conditions deteriorated rapidly. Crossing the valley the snow just kept coming and traffic slowed to a crawl. My journey that had started at 7 AM that morning was completed 17 hours later at 11 PM. The only trouble I had was getting up my steep and snow-covered driveway. But I made it.

All images photographed with the Leica M8 and Zeiss ZM lenses.