17 years ago, as a recent graduate of the Fine Art Photography at the University of Akron I had a problem. With degree in hand I had no more class critiques to work toward. Senior projects all wrapped up. Working at Dodd Camera in Cleveland and then later as a photo assistant in the area. Though I was working in my profession I had to get out and photograph for myself. Personal work as it would be called by career coaches. Except my personal work was truly personal, not just spec work made to get the attention of agencies. I continued to work like a student and make a dozen images every other week. Quickly a pattern emerged, weekends with good wether, old commercial areas of towns and cities, and midday light because I had to travel in the morning to the areas I photographed. In 2011, as a new resident of northern Utah and with only part time work I continued this pursuit with fresh eyes placed on towns I had not seen before. A collection of these images are on display at Gallery East in Price, Utah through December 8th 2017. The gallery is in the new Fine Arts Center at USU Eastern, a regional campus of Utah State University. Since many if not all of the viewers of this blog will not be able to see the show in person, I’ll share some images here on the blog.

Above: Idaho Falls, Idaho 2014. The post card image for the show and one of the best images to some up the show title. I went to Idaho Falls specifically to wander around it’s old commercial district and see what I could find and the above image I like to think of as a gift from the photo gods. A perfectly clean ally sets up a single point perspective with many hard lines and a beautiful shadow. The order and tension is broke by the twisted power pole and its diagonal shadows in the center and the minimal intrusion of leafless trees and pitiful clouds. The image modulates between looking deep due to leading lines and flat due to limited tonality. 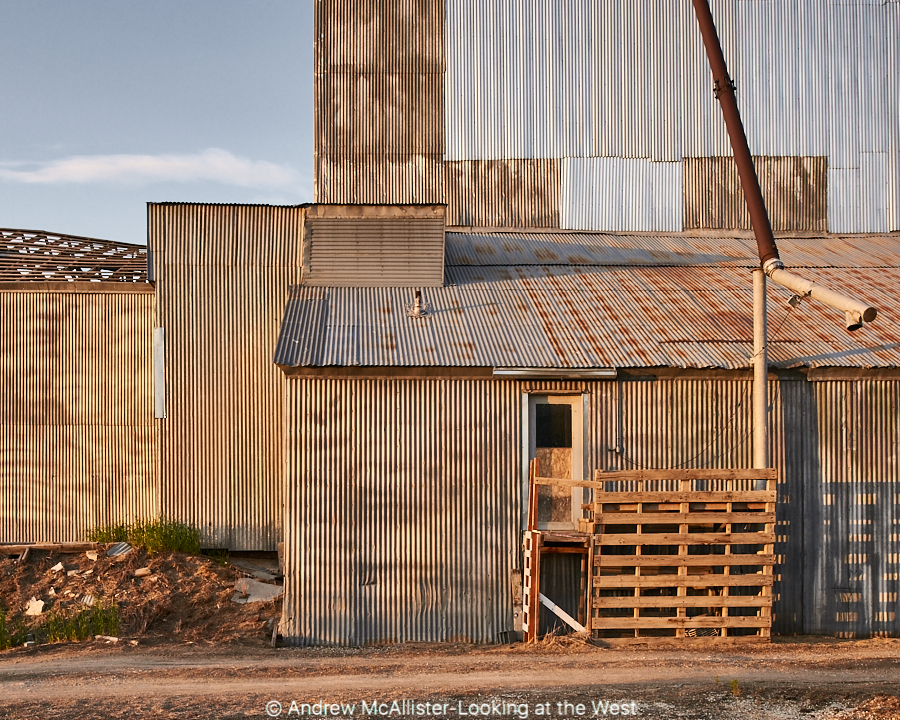 Above: Malad, Idaho 2014. The documentarian photographer works like a hunter gatherer, with a list of suitable subjects in their head and ideas as to how they would like to order them. In the case above the image was shot for a collection I call Silo Survey. Recently I have started to merge parts of that collection into my Towns Less Occupied series. Like the image from Idaho Falls, this image revels in detail and the play of order and disorder. Mostly vertical lines with a few horizontals, mostly tin with a few wood planks. Unusual for me is the time of day but in this case the warm summer light adds to the overall success. I’ll continue showing images from this show in the next few posts. Not all of them are as hard lined as these two I have talked about today.

Photographers are always curious about what you used to make the picture. Both of the images in this post were captured with a 24mm perspective controlled lens on a Nikon body. The image from Idaho Falls I was using a tripod at normal eye height and the Malad image above I was using a giant tripod and standing on a small ladder. Both images were processed in Capture One Pro with the major adjustments being lessening contrast and shifting the blue sky to a slightly pail tone.